The year 2023 marks the 50th year since the U.S. prison population began its unprecedented surge.

The United States is unparalleled historically and ranks among the highest worldwide in its dependence on incarceration.1 Over five million people in total are under supervision by the criminal legal system.2 Nearly two million people, disproportionately Black, are living in prisons and jails instead of their communities. Compare this to the figures of the early 1970s when this count was 360,000.3

The social, moral, and fiscal costs associated with the large-scale, decades-long investment in mass imprisonment cannot be justified by any evidence of its effectiveness. Misguided changes in sentencing law and policy –not crime– account for the majority of the increase in correctional supervision.4

Mass incarceration instigates numerous poor physical, psychological, and economic outcomes for the people who experience imprisonment, for their families, as well as for the broader community.5 Imprisonment leads to declining prospects for employment and results in lower earnings in the longer term.6 Food insecurity, housing instability, and reliance on public assistance are also associated with prior imprisonment.7 Children of incarcerated parents suffer tremendously; imprisonment of a parent leads to significant declines in academic and health outcomes for children.8 High levels of incarceration also destabilizes entire communities, leading to dissolution of informal networks that are known to serve as barriers to neighborhood crime.9 Trust in law enforcement deteriorates as community members experience elevated levels of victimization and the loss of community members, friends, and family members to incarceration.10

The Surge in Prison Growth

In 1972, the imprisonment rate was 93 per 100,000 people.11 The prison expansion that commenced in 1973 reached its peak in 2009, achieving a seven-fold increase over the intervening years. Between 1985 and 1995 alone, the total prison population grew an average of eight percent annually. And between 1990 and 1995, all states, with the exception of Maine, substantially increased their prison populations, from 13% in South Carolina to as high as 130% in Texas. The federal system grew 53% larger during this five-year period alone.12

The number of people in prison began a marginal decline beginning in 2010 and thus far has not reversed course.13 It is important to note that the remarkable 14% decline in 2020 alone was principally caused by accelerated releases during the first year of the global pandemic and thus misrepresents the overall 25% drop in imprisonment since 2010; with the exception of 2020, prison numbers have declined in the range of 0.5 to 3% annually.14 Compared with 2020, in 2021, the United States dramatically slowed its prison decarceration and increased its jail population. 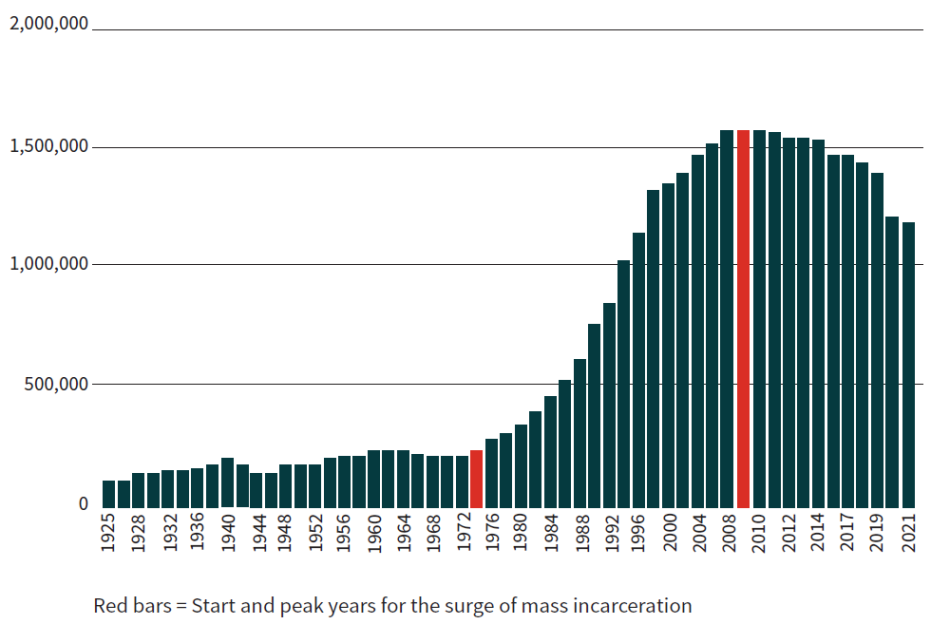 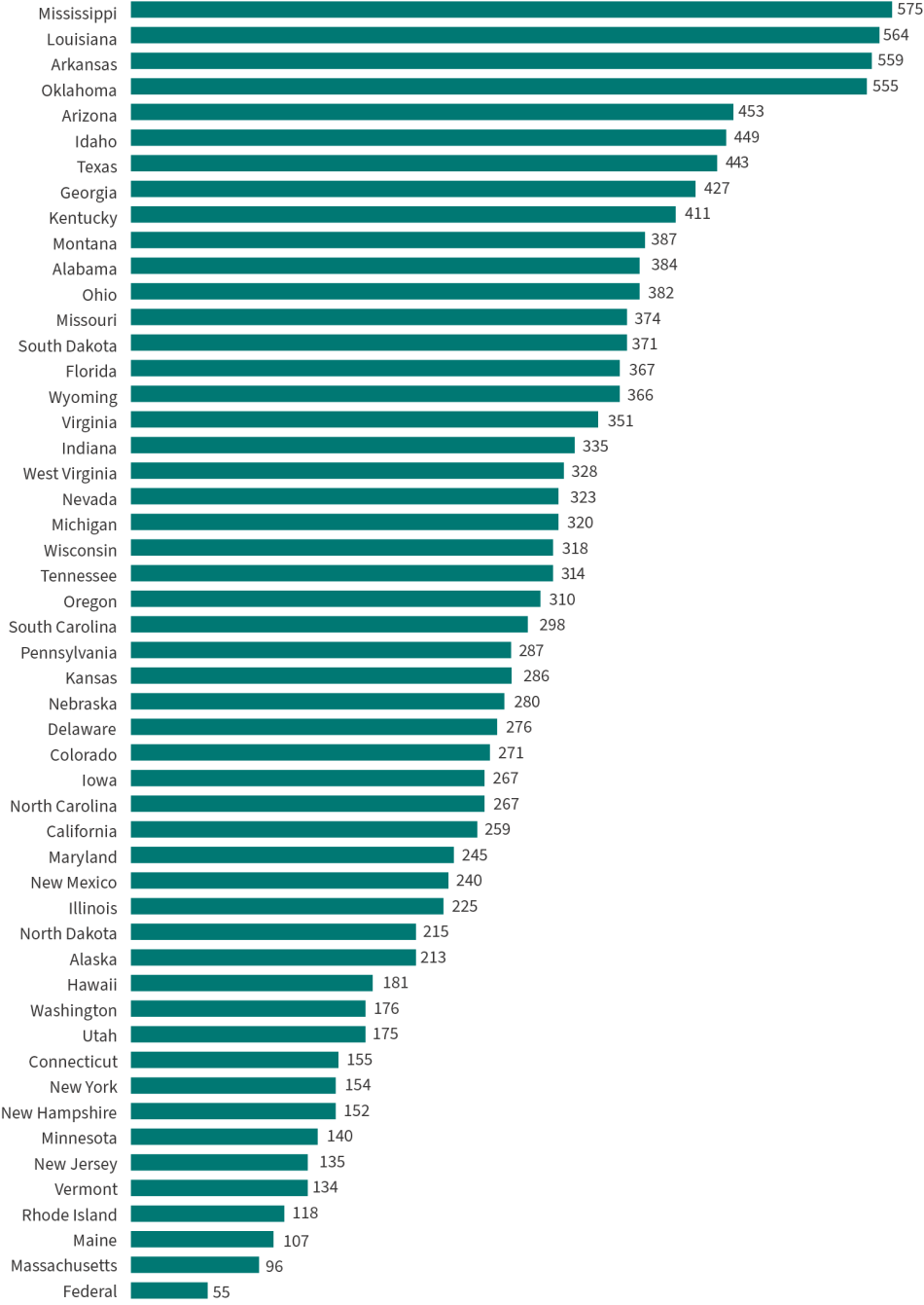 Racial and ethnic disparities are a substantial feature of the American prison system. Systemic causes range from a history of racial and ethnic subordination to ongoing police tactics that unfairly ensnare people of color into the system, and also include charging and sentencing practices that create stiffer punishments for people of color. Black men are six times as likely to be incarcerated as white men and Latinx men are 2.5 times as likely. Nationally, one in 81 Black adults in the United States is serving time in state prison.15

Figure 4. Racial and Ethnic Disparities in State and Federal Prison, 2021

Despite common misconceptions that federal prison is reserved for the most violent crimes, it is the case that roughly half (47%) of those sentenced to federal prison have been convicted of drug offenses.

Sentencing policies enacted under the banner of the “War on Drugs” which began in the early 1970s and accelerated with the utilization of broadly punitive mandatory minimum and three-strikes policies, resulted in dramatic growth in incarceration for drug offenses. This is particularly evident at the federal level.

The Sentencing Reform Act of 198417 established the United States Sentencing Commission (USSC) with the primary task of creating sentencing guidelines for the purpose of limiting the discretion of sentencing judges at the federal level.18 The guidelines went into effect in late 1987, at the same time that federal parole was eliminated, and federal prison sentences began their steep upward climb, especially for drug offenses.19 This climb was exacerbated by the passage of the Anti-Drug Abuse Act in 1986, which imposed stiff mandatory minimums for drug offenses, including a five-year  mandatory minimum for the simple possession or sale of five grams of crack cocaine. In contrast, the mandatory minimum trigger for powder cocaine, a chemically identical drug to crack, required the sale of 100 times that amount. In 1986, people released after federal imprisonment for a drug conviction spent under two years in prison, but by 2005 people convicted of federal drug charges served an average of seven years.20 That increase was borne disproportionately by Black individuals. Prior to the enactment of the Anti-Drug Abuse Act, the average federal drug sentence for Black individuals was 11% higher than for whites. Four years after its passage, that figure increased to 49%.21

In 2010, the US Congress passed the Fair Sentencing Act in an effort to ameliorate some of the damage done by the law, reducing the sentencing cocaine disparity from 100-1 to 18-1.22 In 2019, the First Step Act applied the 2010 Fair Sentencing Act retroactively, and reduced other sentences for drug offenses. Approximately 4,000 people benefited from retroactivity of the law.23 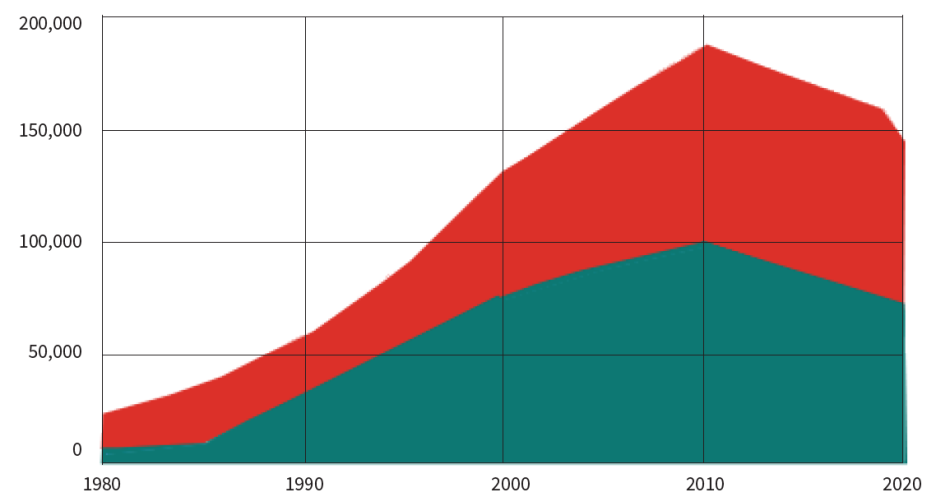 At the start of the era of mass incarceration, fewer than 6,000 women were in state or federal prisons.24 This figure reached a high of 105,000–more than 17 times the 1970 level–by 2015, followed by marginal but steady declines since. Still, 2021’s population figures are far above those of the pre-mass incarceration era – nearly 79,000 women were imprisoned in state or federal prison. 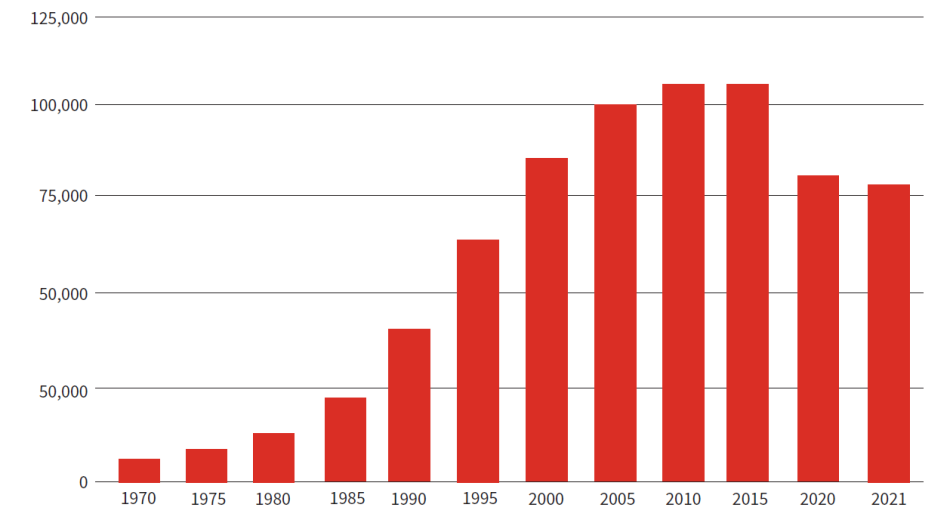 Mass incarceration’s toll on human dignity is no more apparent than with the staggering proliferation of life sentences; today one in seven imprisoned people is serving a life sentence. Life sentences have consistently been included as a sentencing option, but their use expanded dramatically during the era of mass incarceration.25 Historically, life sentences came with the expectation of release; they were used to encourage good behavior among people who were incarcerated. Individuals were typically released in 10-15 years through parole or executive clemency.26 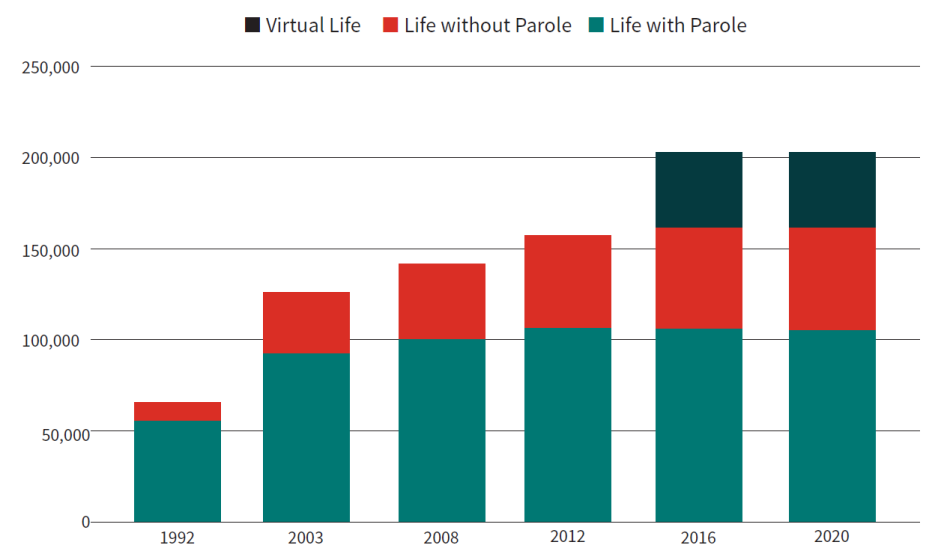 Official statistics of persons serving life were first published in 1984, showing that 34,000 people were serving life sentences, though these figures did not distinguish sentences of life with parole and life without parole.27 As depicted in Figure 8 above, In 1992, 9,404 people were reportedly serving LWOP and another 57,888 people had parole-eligible life sentences. By 2003, the number of people serving LWOP had more than tripled and parole eligible lifers had increased 62%. By 2020, six times as many people were serving LWOP, reaching an all-time high of 55,945; the total population of people serving LWP rose 82% over these years.

Evidence shows that criminal careers are relatively short, in the range of 10 years,28 meaning that continued incarceration beyond this point produces diminishing returns on public safety, wasting limited resources that could be put toward effective crime prevention strategies. Concluding that long sentences deter criminal behavior assumes rational, uncompromised decision making and a fairly sophisticated understanding of the criminal code, neither of which is likely before the commission of a crime.29 Among youth, research finds that brain development impacts behavior, and therefore punishments must accommodate this reality.30

The growth of life imprisonment is echoed by the growth of long prison terms more broadly. Sentences of all lengths have expanded during the era of mass incarceration. The infamous “Rockefeller Drug Laws” (1973), which mandated 15 years for possession of marijuana and other drugs, was the first in a  broad range of state-level mandatory sentencing schemes. In 1984, Washington state adopted the nation’s first “truth-in-sentencing” law that required people to serve 85% of their sentences, and 27 states quickly adopted similar laws over the next 15 years. Fourteen states had eliminated parole altogether.31 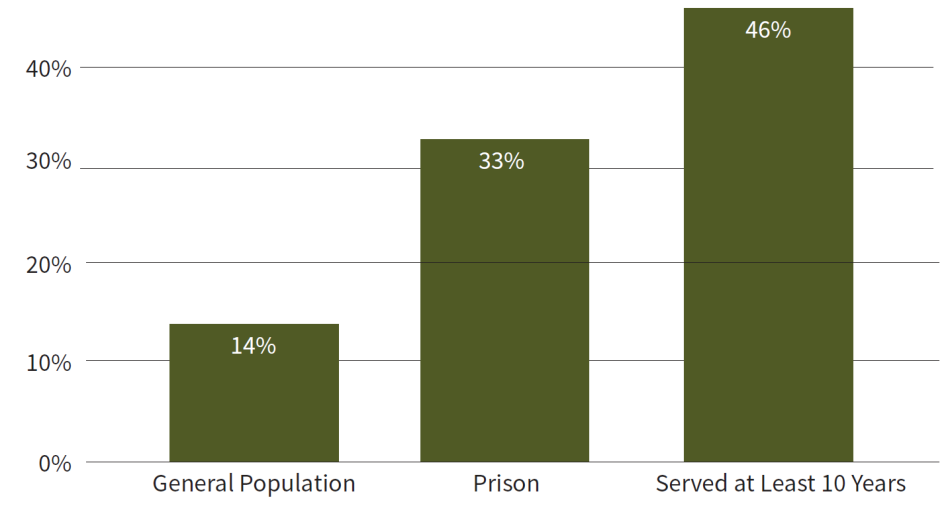 In 48 states, a felony conviction can result in an individual’s loss of voting rights. The period of disenfranchisement varies by state, with some states restoring the vote upon completion of a prison term, and others effectively disenfranchising for life. As a result of the dramatic expansion of the criminal legal system over the past 50 years, restrictions on voting rights for persons with a felony have  diminished the political voice of many communities. As of 2022, 4.6 million Americans were unable to vote due to state laws restricting voting rights for those with felony convictions. Among voting-age African Americans, 5.3 percent is disenfranchised compared to 1.5 percent of the adult non-African American population. Three out of four people disenfranchised are living in their communities, having fully completed their sentences or remain supervised while on probation or parole.35

Children and youth, especially Black and Latinx children and youth, were swept up in mass incarceration’s harmful policies as well. Under the guise of concern over rising violent crime in the late 1980s and early 1990s, policymakers quickly adopted and spread the fabricated “superpredator” theory that described young Black boys as especially dangerous.36 Proponents of the theory believed that despite a young person’s age at the time of their offense, certain offenses should be handled in adult criminal court. Lawmakers advanced policies that transferred tens of thousands of young people as young as 13 years old into adult court, jail, and prison systems that, by design, do not account for age.37

With two decades of experience it is now abundantly clear that these policies were counterproductive. Holding youth in facilities with adults is associated with heighten physical and sexual abuse as well as higher rates of recidivism upon release.38  Unlike the trends in adult prison and jail, youth figures started to decline sooner and by the turn of the century the number of youth in prisons and jails was steadily declining, amounting to an 83% drop overall by 2021.39 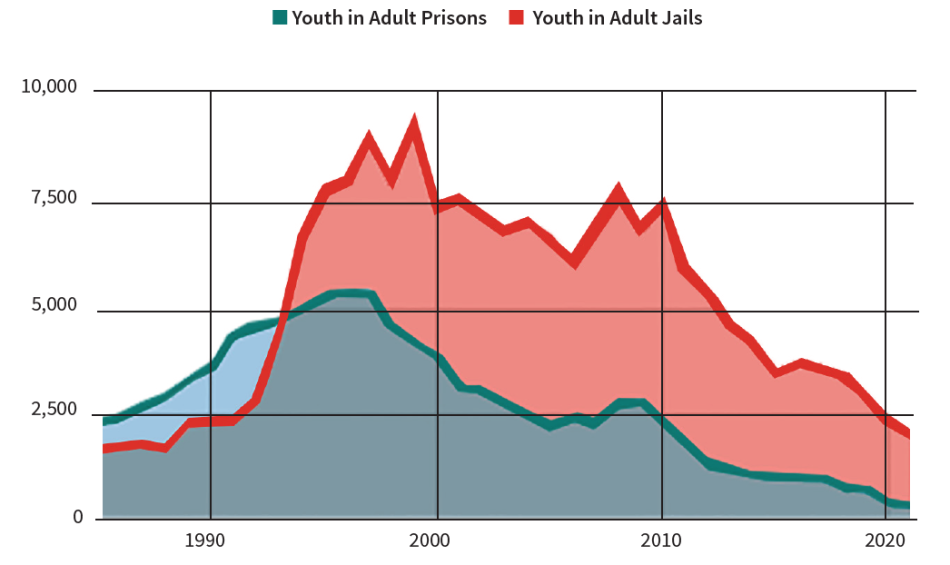 There are important lessons to be learned from this experience. The first is that adopting major policy shifts in an emotional political climate is never a wise course of action. Policymakers who promoted increased transfer of children to adult courts in the early 1990s did so at a time when youth (and adult) violence had risen precipitously. In retrospect we know that the spike in violence was largely due to the emergence of crack cocaine drug markets, and was relatively short-lived. The second lesson is that revising how we think about people who commit crime changes how we respond to their actions. Taken with an understanding of structural disadvantages that permeate American society leading to disparate economic, education, housing and health outcomes should lead policymakers to aggressively pursue reforms in these areas while also investing in evidence-based individual-level prevention and intervention programs. The life history of individuals in prison shows that, more often than not, they committed their crimes after major setbacks — addiction, loss of jobs or housing — for which they received little support. There are few individuals in the prison system so dangerous that they can never be released back into the community. If we truly want to end mass incarceration we need to change the mindset about crime to one that emphasizes prevention and restoration over punishment.

An estimated 4.6 million Americans are barred from voting due to a felony conviction.

How Many People Are Spending Over a Decade in Prison?

Twenty-one states partially closed or fully closed at least one correctional facility since 2000, resulting in a trend of prison repurposing in which old prisons are converted for community and commercial use.

This year, The Sentencing Project and a coalition of advocates, experts, and partners are launching a public education campaign, 50 Years and a Wake Up: Ending The Mass Incarceration Crisis In America. The campaign raises awareness about the dire state of the criminal legal system in the country, the devastating impact of incarceration on communities and families, and proposes more effective crime prevention strategies for our country.